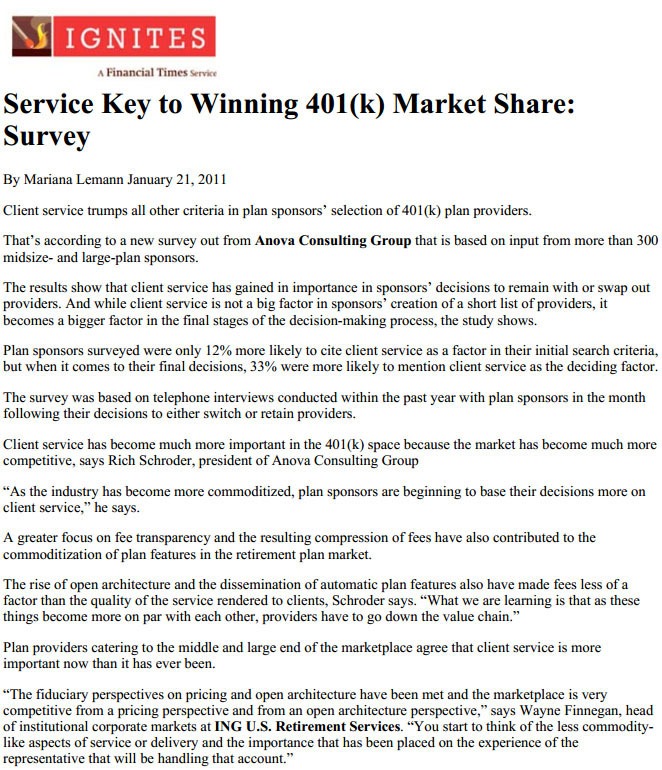 That’s according to a new survey out from Anova Consulting Group that is based on input from more than 300 midsize- and large-plan sponsors.

The results show that client service has gained in importance in sponsors’ decisions to remain with or swap out providers. And while client service is not a big factor in sponsors’ creation of a short list of providers, it becomes a bigger factor in the final stages of the decision-making process, the study shows.

The survey was based on telephone interviews conducted within the past year with plan sponsors in the month following their decisions to either switch or retain providers.

“As the industry has become more commoditized, plan sponsors are beginning to base their decisions more on client service,” he says.

A greater focus on fee transparency and the resulting compression of fees have also contributed to the commoditization of plan features in the retirement plan market.

The rise of open architecture and the dissemination of automatic plan features also have made fees less of a factor than the quality of the service rendered to clients, Schroder says. “What we are learning is that as these things become more on par with each other, providers have to go down the value chain.”

Plan providers catering to the middle and large end of the marketplace agree that client service is more important now than it has ever been.

“The fiduciary perspectives on pricing and open architecture have been met and the marketplace is very competitive from a pricing perspective and from an open architecture perspective,” says Wayne Finnegan, head of institutional corporate markets at ING U.S. Retirement Services. “You start to think of the less commodity- like aspects of service or delivery and the importance that has been placed on the experience of the representative that will be handling that account.”

The quality of the service rendered by providers to plan sponsors ultimately depends on intangibles like the client’s chemistry and personal fit with the relationship manager handling the account, Schroder says.

That has been the experience Putnam Investment has had with its clients over the last few years.

“If you look at why plan sponsors choose to leave their current provider or at least look at options in the marketplace, the level of client service is a contributing factor if not a driving factor,” says Edmund Murphy, III, managing director and head of defined contribution at Putnam.

But the decisions clients make are driven by more than client service, Murphy says. “It is not only about being responsive to a customer, but it is being proactive.” He touts Putnam’s client-to-relationship manager ratio, and says the firm has one of the lowest ratios at a time when “a lot of firms [are] cutting back on front-line associates.”

Fidelity Investments attributes the retention of a 20-year contract with Hewlett-Packard to client service and investments in technology. The behemoth announced yesterday that it has extended its relationship with HP for an additional five years. The deal consolidates more of HP’s retirement plan under the Fidelity umbrella.

“They look at this as an opportunity to look at their plans and to consolidate them under one provider,” says Jeffrey Lagarce, executive VP of workplace investing at Fidelity Investments. But Lagarce says that while client service is important, sponsors assess providers on a variety of factors.

“Very large clients look at all parts of the equation: competitiveness of fees, technology capabilities, Web capabilities, plan participant retirement planning tools. We have had a long relationship [with HP] and we’ve been able to demonstrate our ability to invest in technology, offer this at a competitive market price, and they have been very satisfied with the service.”